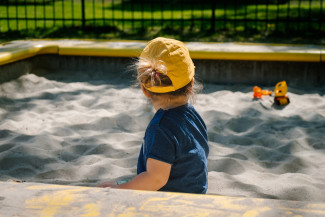 See the study
Amyotrophic lateral sclerosis is a neuromuscular disorder that is developed when neurons controlling voluntary movements start to die. This is Amy's story.

«It was a sunny Sunday morning in the middle of September. Amy was playing in the local playground under the watchful eye of her parents, trying to squeeze out the last days of vacation before school started again. Summer holidays had already come and gone – as is usual in these cases, way too fast for her liking – and the lazy, warm days were giving way to shorter, busier ones as the town (they lived in a little flat in Sussex, South England) was starting to come alive again.

Amy had always been a very active and social child who loved to make new friends – including her favorite one, a beautiful dog named Toby who always came by the playground to greet her and demand belly rubs. She also loved going for long walks along the beach and playing with her loving family.

However, that day she seemed a bit off. She was much less talkative than usual and she was speaking much slower than usual - she was slurring her speech – and she also seemed to have some trouble swallowing the ice-cream that another kid had given her to taste. Her parents where immediately concerned, and after checking out how she felt, they decided to go home. The next day, the problems hadn’t seem to go away – she still had difficulty eating and the words coming from her mouth were still difficult to understand.

Are you affected by amyotrophic lateral sclerosis?

Not wanting to wait any longer, her parents went to their general practitioner, who, a bit disconcerted by the symptoms, derived the child to the hospital’s main neurologist. As soon as they entered the doctor’s office, he started asking some standard questions. “When did she start slurring her speech?” – he queried. “A few days ago. She has also had some trouble eating food” – Amy’s mother answered. “I see.” – continued the doctor – “I want to make some more tests, just to make sure. We’ll start with a test called electromyography, and afterwards we’ll do a nerve conduction study. This will tell me about her muscles’ electrical activity and about her nerves’ ability to send electrical impulses. We’ll also perform an MRI so that we have some images of your daughter’s brain, and at the end we’ll take some blood and urine samples” “Is it really necessary to do all of this?” – exclaimed the father – “It seems painful”. The doctor explained – “Don’t worry. The tests are harmless. I’m trying to discard the diagnosis of several important diseases, and this is the best way to do it. If those tests are not enough we may have to do a spinal tap and a muscle biopsy, although since these are more invasive we’ll try to avoid them.” “Okay, doctor. Whatever it takes” – concluded the mother.

After a battery of tests, the physician was able to confirm that Amy had the first stages of amyotrophic lateral sclerosis (ALS), a neurodegenerative disease characterized by progressive degeneration of the motor neurons in the brain and spinal cord. ALS is characterized by stiff muscles, muscle twitching and gradually worsening weakness due to muscles decreasing in size. “It is rare for it to happen in kids, but it can occur in some cases”- the doctor said as he sat again in his chair.

After the explanation, the parents couldn’t help but ask – “Why our Amy?”. The doctor told them that, although the cause was not known in 90-95% of cases, it was believed to involve both genetic and environmental factors. The remaining 5-10% of cases were inherited from a person’s parents. The mechanism by which ALS caused symptoms was due to damage to both upper and lower motor neurons.

Amy’s mother started crying – “What do we do now, doctor?” He answered – “I know it’s a difficult situation, but there are several things you can do to help your daughter. ALS management focuses on treating symptoms and providing supportive care with the goal of improving quality of life and prolonging survival. For now, we will focus on that”. Over the next few sessions – which went on for several months – the doctor explained to them all the information that they needed for their daughter. “One of the main supportive therapies is something called non-invasive ventilation if your child begins experiencing problems with breathing” – he continued – “and it is also important to prevent weight loss and malnutrition due to dysphagia (difficulty swallowing). She should eat soft, moist foods and, if she has trouble drinking water, adding a fluid thickener may help and make her life easier. A physical therapist will also make wonders for her”.

At the beginning, Amy’s parents were –understandably – shaken by the news. However, over the course of the sessions and – as they started to learn more and more about the disease – they came to the realization that, while ALS was definitely a difficult disease to manage, they would try with all their heart to provide Amy with the best care so that she could enjoy the best life possible from now on.

Although there is currently no cure for ALS, there are several management strategies which can be useful for treating its symptoms.

Physical therapy plays a large role in ALS individuals’ rehabilitation. A multidisciplinary team of physical, occupational and speech therapists can help ALS patients by delaying loss of strength, maintaining endurance, improving speech and swallowing capacity and limiting pain. As a parent of a child with ALS, working together with these personnel will help your son or daughter become more functional and independent.

It is key to prevent weight loss and malnutrition in ALS patients since it increases both quality of life and survival. Muscle wasting and difficulties swallowing are the main causes of this complication, but it can be managed by eating soft, moist foods and adding thickeners to any liquids (water, coffee...). A feeding tube may be considered if an ALS patient loses 5% or more of their body weight or if they cannot safely ingest food and water.

Amyotrophic lateral sclerosis may be a difficult disease to manage, but with appropriate care and physical therapy your child can have an increased quality of life and independence.

There are several support groups which can help you know more about the disease, such as ALS Association, International Alliance of ALS/MND Associations and HARK.

Share4Rare is also a great tool to help boost research, connect with other people like you, and a safe space to share experiences with other parents who have a child affected by juvenile ALS. It can help you create a support network so that you can provide the best possible care and quality of life for your son or daughter.

A patient’s experience like Amy’s can be challenging and, at times, everything may seem a bit hopeless. But never forget that scientists are working day and night to find a cure and new treatments for ALS and that you are not alone – there are a whole lot of people and organizations eager to support you, help you and accompany you through this journey.