The story of Hafiz: father of a Duchenne adult in Sri Lanka 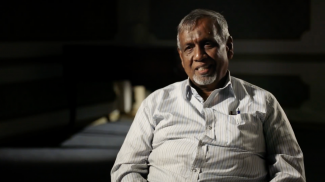 The powerful story of Hafiz who lost his son with Duchenne muscular dystrophy (DMD) in 2018: resilience, strength, love in his words and eyes. This interview is created by Nicoletta Madia. With her project Social Duchenne, she is using storytelling to collect experiences from people living with Duchenne muscular DMD across the world.

I am Hafiz Issadeen, a parent from Sri Lanka. I had a son with Duchenne muscular dystrophy who died last year at the age of 37. I thought he must be the oldest patient in Asia at that time. I used to be a teacher and a school principal and teacher trainer. At the age of 41, I had to retire prematurely because I had to look after my son. The school work consumed too much of my time. I had to be a father rather than being a school principal.

When my son was about four years old, he was finding it difficult to climb steps. Also, he was falling down suddenly and without a cause. My mother told me: “there is something different in your child, why don’t you take him to a doctor”. We went to see a child specialist. She said: “It could be muscular dystrophy but don’t take my opinion. Go to the medical college and get him tested”. We got him tested and they confirmed that it was Duchenne muscular dystrophy.

A that time, I didn’t know anything about Duchenne. When I referred to the medical textbook I had, I had a big shock because it said that boys with Duchenne would live only up to 18 years. However, I did not reveal to my wife about the fatality of the disease. I told my son that it would pass and he would be okay in three to four years. Later on, the truth came out and my son got to know he was going to die.

When my son became homebound he felt lonely as he had no friends. Even his classmates didn’t come to see him. However, through Facebook many people became friendly with my son. When someone rang him mistakenly, he would say: “This is a wrong number, but please accept me as your friend”. Through this way, and through Facebook he could acquire many devoted friends. Someone in his friends group even encouraged him to write poems. So, he had composed a poem and posted in on a Facebook page.

I didn’t know that he had written a poem. But when he sent it to me and I read it and found it very impressive. I told him “Son, this is very impressive. If you can write more poems like this, I can publish them in book form.” As I have been a publisher and I have my own typesetting facilities, he knew that I could do it. He started to write, and I did only small edits because I didn’t want to change his style. As he had attended school only up to grade five, I felt that it should reflect in his poems.

His first book, Silence Struggle with 22 poems on various topics about his personal experiences as a Duchenne patient, was launched at a ceremonious occasion. Lots of people attended it and he got a good amount of money. He was on the stage in his bed with his ventilator! He gave the vote of thanks lying in his bed. The success of the first book encouraged him to write more books. Through his books, he earned more than one million Sri Lankan Rupees. That’s about 5,000 US Dollars. Only after his death that I learned he had used most of those funds to help the needy people.

I was a teacher as well as a writer, and I was publishing my own magazine similar to Reader’s Digest.  It was being published for about 10 years, with 6 issues per year. He was reading those, and was perhaps motivated by it. I spent a lot of time with him, encouraging him, because I knew he couldn’t be cured. I told him that his life should be useful to other people.

"The strength of his faith was very important"

He was ready to accept death. My eldest son was like a mentor for him. He was a computer engineer and I was depending on him for the future. Suddenly, he got diagnosed with leukemia and died within four months, about 10 years before my other son. His death was a big loss for all of us, because the elder brother was teaching him everything.

After his brother’s death, my son told me to ask the people at the mosque to reserve the spot next to his grave for him. But this was not meant to be. His mother was his caretaker and nurse in every way. Even in his poems, he says “Mother, one day I wish I could come and help you”. But unfortunately, she died three years before him.

You can watch the full interview to Hafiz Issadeen here.