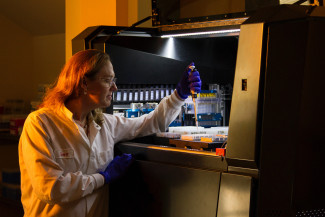 This finding opens the door for more flexible genome editing tools and could provide new therapeutic options for genetic diseases and their diagnosis.

An international research team, led by Raúl Pérez Jiménez from the CIC nanoGUNE (San Sebastián-Donostia, Spain), has managed to reconstruct, through bioinformatics tools and for the first time, the evolution of the CRISPR-Cas system proteins from organisms living 2,600 million years ago. This study, published in Nature Microbiology, shows the rebuilding, synthesis and functionality of these proteins, since researchers have confirmed that they were capable of editing human cells in vitro using these tools.

The CNB-CSIC and CIBERER researcher Lluís Montoliu, who is part of the research team, explains: “[…] It is astonishing that we can revitalise Cas proteins that existed billions of years ago and verify that they already had the capacity to operate as gene editing tools at that time, something we have now confirmed by successfully editing genes in human cells.”

The study has also shed light on other issues. Apparently, the CRISPR-Cas system has become more complex over time and has adapted to the new viral attacks that bacteria have suffered throughout evolution. The CRISPR-Cas protein system was discovered by the Spanish researcher Francis Mojica (who has also participated in this ground breaking study), in bacteria living in the salt flats of Santa Pola (Alicante, Spain). The repetitive DNA sequences he found in the genome of these organisms turned out to be genetic material from viruses that had infected their ancestors, allowing them to recognise these viruses in subsequent attacks and to defend themselves by cutting their DNA off. After this discovery, scientists developed the CRISPR-Cas9 genome-editing tool, for which Jennifer Doudna and Emmanuelle Charpentier received the Nobel Prize in Chemistry in 2020.

Currently, one of the main purposes of biomedicine is to search for new, more flexible and precise gene editing systems, since the available CRISPR-Cas systems are very complex and do not always work well in human cells. This is why studies like the one presented by Dr. Pérez Jiménez's team are so important. They can provide in the future more efficient genome editing tools and allow developing treatments with fewer side effects.