The rebellion of the leukocytes: Íngrid’s story 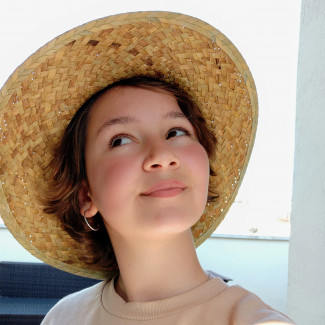 One day, in the summer of 2018, Íngrid felt an unusual pain in the elbow and she noticed it was swelling. The traumatologist concluded that it was due to a simple tendonitis probably caused by the growth process. After applying ice and ibuprofen, the pain disappeared in a few days. But, a week later, the same symptoms appeared on the opposite elbow: it began to swell, to create fluid in the joint and to cause her a very intense pain. Her rapidly family took her to the emergency room and the doctors decided to send her to Sant Joan de Déu Children’s Hospital in Barcelona, not having yet a clear diagnosis.

Mónica, Íngrid’s mum, speaks about how they obtained the final diagnosis: "Once in Sant Joan de Déu, Íngrid went through a series of tests: analysis, ultrasounds, extraction and analysis of the fluid accumulated in the elbow... After a couple of days they gave us the diagnosis: there was a trace of leukemic cells in the blood". Finally, a bone marrow aspiration just confirmed the type and degree of leukemia. Ingrid had acute lymphoblastic leukemia. In this disease, immature white blood cells or lymphoblasts proliferate without uncontrol and prevent the the rest of the blood cells from growing, so it is usual to develop infections, anemia (low number of red blood cells) or to experience easy bleeding.

Íngrid is currently 12 years old and she is in maintenance phase. "Ingrid must take oral chemotherapy daily," says Mónica. “We go to the hospital with her every four weeks to have control analysis with the hematology team. If any complication or side effect arises, she is immediately referred to the corresponding specialist, since chemotherapy can cause optic, auditory, bone lesions and many other symptoms”. It is precisely this kind of side effects that Ingrid has to deal with: fluid retention, dry skin and mucous membranes or nausea are some of them. This is one of the main problems in children diagnosed with leukemia, and it sometimes considerably decreases their quality of life.

When asked about the moment they received the diagnosis, Mónica remembers that they had a particularly hard time. “The first thing that comes to mind is that you will lose your daughter. You associate cancer directly to death, possibly due to the lack of information about this disease and the little they speak about it in the media“. Monica talks about all the different feelings that flourished after the terrible news. “You go from rage to pain, sadness, to the helplessness of not being able to do anything so that your daughter does not suffer from this disease and does not have to face a treatment that, in the best case, will leave several sequels. But day by day you begin to assimilate it and it becomes a priority to make your daughter happy and to make her day to day as positive as possible, despite the adversity”.

Upon hospital admission, Mónica rapidly realized that getting together with other families was vital.

“When we entered Sant Joan de Déu, we met the mother of another girl who had been diagnosed with cancer several months earlier and we needed no words. The first thing we received was that mother's hug and she automatically understood all our pain"

"From that moment, having to spend so many weeks in the hospital you end up creating another family: that of parents and children fighting diseases similar to that of your daughter. They are not our biological family, but they are our family in this struggle. In general, you feel accompanied and encouraged by many people, but I always say that the only people who can really understand you are those experiencing the suffering of a child”.

Do you know anyone affected by acute lymphoblastic leukemia?

That is precisely why Monica and her family are in contact with other families in the same situation. “It helps a lot. We try to see each other in a different environment, out of the hospital, and the kids can talk to each other and the parents can talk and share laughs, sometimes tears...”. Social media have encouraged this approach. "Through social media we keep in touch with families that we met in the hospital and with other people that we don’t know, but who are fighting against a rare disease just like we are".

Íngrid’s family has decided to deal with the disease in a positive way.

As Mónica points out, “Long-term plans are no longer useful, it is important to live every day and celebrate a party when we feel like it, no caring if it is a special date or not"

As a mother, she has also had to see how her youngest daughter became her sister’s main support. “In childhood diseases, the role of the siblings is often forgotten. In my case I always say that I have two brave little girls”. The whole family also supports Ingrid’s solidary project aimed to raise funds for childhood cancer research: LEUCO’S by Íngrid.

And, as Monica says, research is essential. “We have only advanced in developing new treatments thanks to research. Since unfortunately no government considers the fight against childhood cancer a priority, families must appeal to society to help us obtain more funds to continue doing research”.

As Monica told us, together we are stronger and getting close to other patients helps to make the road a little more easy-going. And this is where Share4Rare does its part trying to improve the lives of patients and families. “Share4Rare will help us meet other families living similar conditions to that of our daughter and keep up to date with the latest treatment advances”.

In this regard, Share4Rare launched on International Childhood Cancer Day, which took place on February 15th, a research project that will study the effects of the treatment for leukemia on the quality of life of children. This study will be using data provided by patients and caregivers for the first time. To participate in the project you just have to register in Share4Rare and follow the instructions.

*Share4Rare would like to thank Íngrid and her family for accepting to be the image of Share4Rare’s launch campaign. Families like these will be the ones who will make rare extraordinary. Many thanks!