The MRC Centre for Rare and Neuromuscular Diseases Biobank 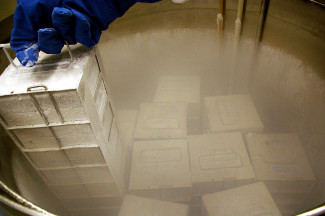 See the study
This unique repository of biological samples was established in 2008 as a joint venture between the JWMDRC at Newcastle University and The Dubowitz Neuromuscular Centre at University College London.

The principal objective of the MRC Biobank is to collect biomaterial from patients affected by neuromuscular disorders with the aim of supporting translational research. The availability of high-quality human biomaterial is crucial for supporting biomedical research, with potential applications at all stages of development from molecular pathophysiology through to clinical trials. To date, the Newcastle bank has processed and stored in excess of 17,000 samples from over 6,000 donors with a range of rare and neuromuscular diseases. An inventory of the collection is available for researchers to view on the RD-Connect catalogue as part of the EuroBioBank network.

The majority of patients donating to the Biobank have either a neuromuscular disease (NMD) or mitochondrial myopathies. However, the Biobank also assists other rare disease researchers within Newcastle University, such as the renal, cardiac, skeletal and stem cell research groups. Donations to the bank are collected via three distinct routes:

The following graphs detail the various donations that have been received and banked in Newcastle since 2008:

An overview of the biobank collection is detailed in the chart below:

The vast majority of the samples belong to undiagnosed patients, followed by samples from patients affected by NMDs like MD1, Duchenne muscular dystrophy or LGMD R2.

The Biobank has supported or acted as the banking hub for 10 large international projects and has supplied specimens to more than 200 researchers around the world, leading to over 100 publications in journals such as Science, Nature Genetics, Acta Neuropathologica, JAMA Neurology, Neurology & Brain. Biobank sample requests/usage fall into 3 broad categories: 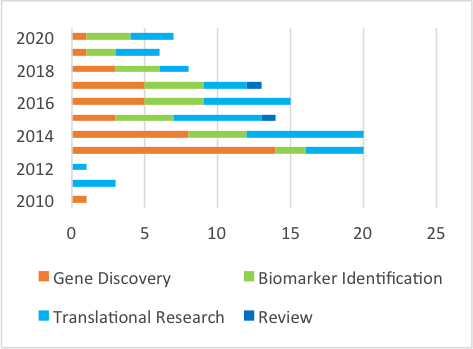 As detailed above, various high profile research publications have highlighted the positive impact of neuromuscular biobanking for translational research, and have proven that the MRC Biobank for Rare & Neuromuscular Diseases is essential for:

The biobank has supplied:

To show how the MRC Biobank has taken part and supported various projects since 2010, below is a timeline breakdown:

Depending on what is happening in NMD research, the MRC Biobank has been able to release specific samples over the years:

An overview of biobank samples released to researchers is shown below categorised by the type of disease:

A key aspect to the work carried out by, and in collaboration with the Biobank, is how it benefits rare disease patients:

Gene discovery projects can lead to a definitive diagnosis for many of the undiagnosed population.

The more samples (specimens) stored at the Biobank, the more research project will be feasible, which can lead to an increased number of scientific publications. This will eventually conduct to improved diagnostics and treatments in the future.

Many high-profile research publications have highlighted the positive impact of NMD biobanking for translational research and proven the national MRC Centre Biobank for Rare & Neuromuscular Disease partnership to be a unique source of rare biomaterial. The Biobank’s success in supporting scientific research into NMD confirms that continuous funding and sustainability of neuromuscular disease biobanking is essential for collection of these scarce and sometimes unique samples, standardisation of biosample processing, long-term sample storage, protection and custody of the collected biomaterials and data management.

Are you affected by a rare neuromuscular disease?