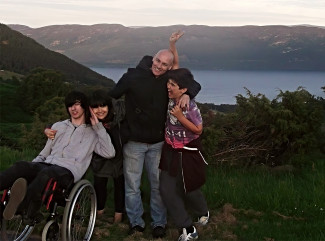 See the study
We recently spoke to Jeffrey, a single father caring for a young boy affected by a genetic neuromuscular disease. This is what he told us.

Jeffrey Galuidi is Jackson’s father, a young boy with congenital myasthenic syndrome (CMS), a rare neuromuscular disease. “Jackson was diagnosed with a general muscle wasting condition a couple of days after his birth, and was not diagnosed with CMS until he was about 12 (due to new research into the human genome: DOK7 gene). Before that, Jackson was diagnosed with a general muscular myopathy. His symptoms include chronic fatigue, muscle weakness in lower and upper limbs, limb-girdle muscle weakness, and lower than average lung capacity”.

Jeffrey describes how the disease affects his son on a day-to-day basis and in terms of the effect on their family life. “Jackson finds it difficult to walk and to have enough energy to see him through the day. He tires very easily. This affects all aspects of his life. He talks with a quiet voice; this prevents him from being heard in groups. These physical problems have affected him socially and emotionally as he grew up. He is shy around groups of people and prefers his own company and online socialising (this is mostly gaming rather than social media)”.

Jackson also enjoys music and is very good at playing the guitar. He has been involved in music concerts but this has stopped since he became more independent and living in student accommodation as a Physics student at Newcastle University.

Are you affected by congenital myasthenic syndrome?

Jeffrey highlights the positive side of taking care of Jackson. “As a single parent bringing up Jackson has had a large impact on my life, but not always in a negative way as it has made me become more attentive. As an example, I did roughly ten years of voluntary work in schools that Jackson attended so that I could cater for his needs”.

There were always bad moments too. “Jackson had a special needs assistant, whom never seemed to understand his condition. I re-educated myself to degree level with an Early Years Sector Endorsed Foundation Degree while I did voluntary work in schools. As a caring parent I do find myself overly protective and concerned for Jacksons future and independent living”.

Jeffrey says that, for him, the most misunderstood part of caring for a family member with a rare disease is “the emotional concern for your child’s future, as they will have to live an independent life on their own. With a rare disease like CMS it is hard to have any community support and/or understanding; there is no one to talk to who has had the same experiences of caring for someone with this particular disease”.

Jeffrey is not in contact with any other families in a similar situation, and when asked whether he receives sufficient support in his role as a carer confirms that he does not. “But to be honest I have never really sought extra support and tend to provide support on my own accord. I’m not sure how this affects Jackson and if it would be more beneficial for him to be ‘plugged in’ with others that have the same condition as him and/or other rare disease conditions”.

Jeffrey’s advice for other families who have received a rare disease diagnosis is very pragmatic, explaining how important it is to look after yourself. “Keep yourself in good, physical shape".

"Do not neglect your own health too. As a carer, you can provide a child so much more support if you have good health"

"This isn’t to say you have a become a gym ‘jocky’, just pay some attention to your eating and sleeping habits. Involve your wider family in trips and family gatherings so that your child is not brought up isolated and encourage your child to take up a hobby like learning a musical instrument, art crafts/drawing and video gaming. Look for something they can enjoy at the same level as a person without a condition”.

As a parent of a child with a rare disease, Jeffrey feels that Share4Rare could be a helpful tool. “I would like Share4Rare to provide latest research studies (in a layman, digestible way) and links to any conferences or talks that would be open to patients with rare disease. These could be online Zoom or video conference links. It would be nice to be involved in any research that is taking place in the health community. It would also be nice to be able to share and chat with other carers and patients with rare diseases so that problems, information and suggestions can be shared”.