The American Society of Clinical Oncology celebrated its annual meeting virtually on May 29th to 31st 2020. These are the highlights for paediatric oncology.

ASCO Annual Meetings are great opportunity for healthcare professionals and patients advocates all over the world to follow the latest scientific news in cancer research. Exceptionally this year, in the context of COVID-19 pandemic, the conference was held in a virtual format with FREE registration, so more patient advocates and patients had the opportunity to participate and learn.

As every year, Melanoma Patient Network Europe advocates attended the ASCO scientific sessions, sharing information and educating patients and advocates across Europe. As well as for melanoma, this year we have closely followed paediatric cancer, an area where a lot has happened, but more needs to be done especially for solid tumors such as neuroblastoma, glioma and metastatic sarcomas (1).

Below some note-worthy news on this area:

Neuroblastomas are cancers that start in the young nerve cells (called neuroblasts) of the sympathetic nervous system, so they can be found anywhere along this system (2). Children with a high-risk neuroblastoma that comes back have poor outcomes and researchers are looking for new therapy combinations to improve their survival. This year, interesting results came out from the BEACON-Neuroblastoma phase II trial, a study with multifactorial design for children with neuroblastoma that is difficult to treat. 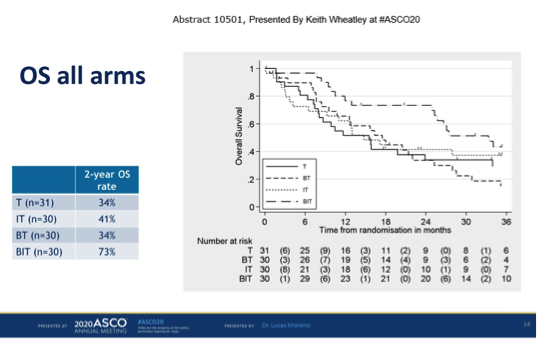 In this study, children who received the combination of Bevacizumab and Irinotecan added to Temozolomide (BIT), had better outcomes than those on the temozolomide alone arm (T). Two years Progression Free Survival reached 49% for BIT versus 29% for T. As for Overall Survival, 73% patients on BIT survived 2 years in comparison with 34% on temozolomide. If this is finally confirmed, it would mean that adding either Bevacizumab (B) or Irinotecan (I) to Temozolomide would not improve children's outcomes, but adding both (BIT) would do, thus BIT triple combination could increase the survival for children suffering from neuroblastoma. Abstract 10501 was presented by Keith Wheatley, from the University of Birmingham.

This research was again for children with neuroblastoma, but this time to those with ALK mutations. Mutations in the ALK genes are found in less than 0.5% of paediatric tumors and only seen in tumors such as neuroblastoma and rhabdomyosarcoma. Amongst the different therapies, Crizotinib was proved in the past to be of not much help in children with ALK mutations. In this context, a trial with lorlatinib, one of the new generation of ALK inhibitors has started. The so-called NANT trial enrolled 33 neuroblastoma children, adolescents and adults with ALK mutations. Particularly, the paediatric group included patients aged 2 to 17 with resistant ALK mutations. The authors reported 24% patients under the age of 18 and 78% patients older than 18 years who got complete, partial and molecular responses to the therapy. 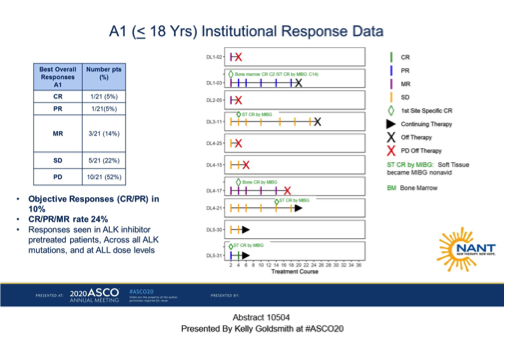 This was remarkable considering that those were patients difficult to treat with Crizotinib, an old generation ALK inhibitor. There are however some concerns regarding the neuropsychiatric changes seen in patients with lorlatinib, as this is known to have superior brain penetration compared to crizotinib. This research was presented by Kelly C. Goldsmith, from Winship Cancer Institute, Abstract 10504.

Paediatric low-grade gliomas start from brain cells such as astrocytes, oligodendrocytes, or mixed glial-neuronal cells. They account for approximately 30% of all childhood brain tumors. Glioma behavior in children can vary, but the majority of low-grade gliomas do not undergo malignant transformation (3). However, children could suffer repeated progressions, resulting in morbidity and in some cases, mortality. Thus, they need to be carefully managed.

Today, children with low grade glioma are treated with surgery and, if necessary, adjuvant chemotherapies such as carboplatin and vincristine or radiotherapy to eliminate the remaining disease (4). These therapies come with long-term side effects for the children and, particularly in the case of radiation, they may cause mortality. These are serious concerns in a disease where 10-year overall survival is more than 90%. To this we add the burden of care these children suffer. With the amazing progress of genetics, we have lately noticed that the majority of paediatric low-grade gliomas harbor genomic alterations such as BRAF fusions (65%) and BRAF 600E mutations (10-20%). Therefore, there was a strong rationale to test oral Dabrafenib/Trametinib, a very known oral Braf/Mek combination in melanoma, for pediatric patients with BRAF V600-mutant low-grade glioma. The first results have shown an impressive tumor regression for children treated with this combination of drugs. 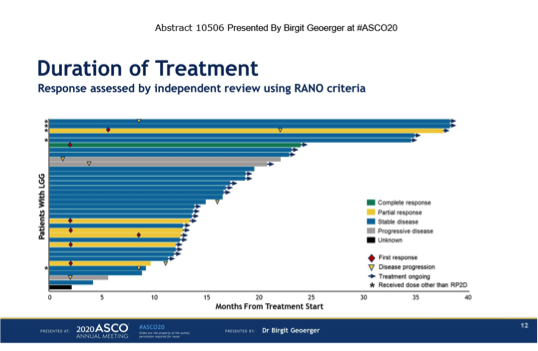 Overall, the combination demonstrated that 90% out of 36 treated patients benefited, getting either stable disease or complete and partial responses. Duration of response ranged from 7 to 34 months and 70% of children were still receiving the therapy in August 2019. Most children had prior therapies. Amongst side effects, skin toxicity (95%) and fever (75%) dominated but, nevertheless, these were manageable. These data need to be confirmed in larger trials and hopefully could change the standard of care of children affected by low grade glioma. This expansion cohort was part of phase I/II study (NCT02124772). Abstract 10506, presented by Birgit Geoerger, MD PhD from CLCC Institut Gustave Roussy.

More new studies have been published under the Paediatric Oncology Track of ASCO20 Virtual, but the access is limited to ASCO registered participants. Still, ASCO makes public lots of interesting research topics on ASCOpubs or on ASCOpost immediately after the Annual Meeting and later and worth following!

Is your child affected by a rare tumor?