Xeroderma pigmentosum, a journey against the sun 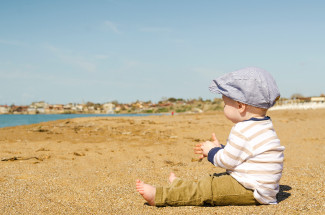 This ultrarare genetic disease produces an extreme sensitivity to sunlight

«He was 3 years old when he was diagnosed with Xeroderma pigmentosum». “Little Josh”, as his mother liked to call him, had been born in a small town near Denver, Colorado. For his second birthday, his parents had a great idea. They would celebrate the day going to the Rocky Mountains, one of their favorite places – after all, their first date (and where they had fallen in love) had been there, many years ago. This way, Josh would be able to start experiencing and enjoying one of nature’s greatest wonders. The day was fantastic – perfect temperature, clear skies and no wind – and, since it was still early spring, the sun’s rays were gentle and not too strong. Josh seemed to be thoroughly enjoying himself, and after a nice, early dinner, they went back home to wrap up the day. Even though the day hadn’t been particularly sun-intensive, his mother had noticed some red areas on her child’s skin, which shortly after had developed into full-on sunburns. Worried, she immediately went to the dermatologist, who told her that «it was just sunburn» and warned her to be more careful next time and put on more sunscreen. «You mothers sometimes don’t know what the sun can do» – the doctor said as he got up from his chair and briefly looked at her with a dismissive glance.

Are you affected by xeroderma pigmentosum?

The months after this event were confusing and frightening. Invariably, after just a few minutes in the sun (even with the highest available SPF sunscreen), Josh would develop severe sunburns. At one point, even the sun’s rays through the car’s windshield had been enough to burn him. His parents understood that there was something more serious going on and took him to one of the best dermatologists in the state. The doctor, after listening to them and taking into account all of the episodes, correctly diagnosed Josh with a condition known as Xeroderma pigmentosum, which they had never heard of before.

This disease - the physician explained - was a very rare genetic disorder in which the body had less ability to repair DNA damage caused by sunlight. Although healthy individuals’ DNA also tends to get inevitably damaged by the sun’s ultraviolet (UV) rays, most people have a natural mechanism able to correct it. In Xeroderma pigmentosum , however, this damage was not repaired, leading to an accumulation of abnormalities in the DNA. It was first described in the 1870s by Moritz Kaposi, a Hungarian physician and dermatologist who coined the term for the condition referring to its characteristic dry, pigmented skin.

«Is this the reason why my son can’t be in the sun even for a few minutes?» – the father asked. «Yes. In medical terms, your son has a mutation in the nucleotide excision repair gene» - the doctor said, quite bluntly. They would later learn that this gene was responsible for the DNA autorepairing mechanism that he had talked about before. Without it, the collection of errors in the DNA eventually caused cells to malfunction and become cancerous or simply die.

«Xeroderma pigmentosum – the doctor kept explaining – appears due to at least 9 specific mutations which can result in the condition. It is classified as autosomal recessive, which means that for it to happen both parents have to be carriers of the mutation». He went on – «if this happens, there will be a 25% chance that the combined alleles (variations of a given gene) are the mutated ones, causing the child to be affected by the disease». Xeroderma pigmentosum was truly very rare – its prevalence around 1 in 430,000 in Europe, 1 in 250,000 in the United States, and 1 in 20,000 in Japan – , but at least Josh’s parents now felt empowered to be able to do something. The unknown could be very frightening, but now that they were starting to learn more about the disease, they felt like it was finally becoming a bit more manageable.

Symptoms of Xeroderma pigmentosum - something they were already very familiar with - included severe sunburn after only a few minutes in the sun, dry skin, changes in skin pigmentation (such as heavy freckling in sun-exposed areas), and eyes that were painfully sensitive to the sun, among other symptoms. Other neurological problems such as seizures, decreased intellectual function, poor coordination and hearing loss might also be present. The disease could also cause some serious complications. Skin cancer was, by far, the most important one. Patients with Xeroderma pigmentosum had a much higher chance of developing melanoma or other related cancers, emphasizing the importance of implementing preventive efforts from a very early age. Without them, about half of the children ended up having some form of skin cancer by age 10. However, with preventive measures, life expectancy was dramatically increased and the patient could live well into their 40s or more.

Fortunately, Josh had been well taken care of. After the sunburn events, his parents had been extremely protective and had always made sure that he wore long sleeved clothes, max SPF sunscreen, and dark sunglasses with the ability to block UV rays. If he continued to use these protective measures and limited sunlight exposure to the absolute bare minimum, he could live on to have a relatively normal, productive life.

The dermatologist reassured Josh’s parents that he would be there to help them and their child along the way and concluded that, although Xeroderma pigmentosum diagnosis was typically suspected based on symptoms and Josh’s were consistent with the disease, they would confirm it with genetic testing – the final proof needed.»

Treatment and future of Xeroderma pigmentosum

Gene therapy – are we there yet?

Although there is currently no cure for Xeroderma pigmentosum, there is some promising progress being made. Gene therapy posits itself as one of the great hopes against many rare genetic diseases because most of them are caused by just one or a few specific mutations. Attempts to genetically correct Xeroderma pigmentosum cells by gene transfer have been successful in a laboratory setting, although there is still a long way to go before it can be safely used on humans. This technique takes advantage of the natural ability of viruses for introducing DNA into foreign cells and uses it for our benefit - in this case, the retrovirus is used to introduce a “correct” copy of the gene so that it substitutes the mutated one. More advanced techniques such as CRISPR give scientists even more precision to make genomic changes at exact locations.

For now, though, the most effective approach is to use as many preventive measures as possible. Treatment usually involves completely avoiding the sun and its UV rays. To achieve this, there are some key elements that should always be used when out in the sun.

Besides these preventive measures, retinoid creams help decrease the risk of cancer and should also be used. Since the patient will not be exposed in any way to sunlight, vitamin D supplementation is generally required. Besides minimizing the effects of the disease by getting as much protection from sunlight as possible, it is also advisable to have regular skin checkups to help detect any possible pre-cancerous lesions and remove them as soon as possible. If cancer develops, it can be treated with the usual methods, including surgery, chemotherapy and several pharmacological treatments.

Xeroderma pigmentosum prognosis: what can I expect?

Even though Xeroderma pigmentosum significantly increases the chance of cancer due to the extraordinary measures needed to avoid UV exposure, if there is an absence of neurological symptoms and the individual is always protected from sunlight, the prognosis is good.

Xeroderma pigmentosum is certainly a challenging disease to manage, but if done correctly, the sunlight-avoiding strategy is very effective in delaying and minimizing the symptoms associated with this disorder. It is advisable to teach the child about the “do’s and don’ts” regarding sunlight exposure from an early age, so that they integrate these habits as soon as possible as part of their daily routine.

There are also several support groups which can help you know more about Xeroderma pigmentosum and how it affects your child, such as NIH Genetics Home Reference, Xeroderma Pigmentosum Society and XP Family Support Group.

Share4Rare is also a great platform to help boost research, connect with other people like you, and a safe space to share experiences with other parents who have a child affected by Xeroderma pigmentosum. It can help you create a support network so that you can provide the best possible care and support to your son or daughter.

A journey like Josh’s can certainly be hard and full of unexpected challenges, but it is also one that can be managed with the appropriate help and support from your doctor, family and close friends. Always remember – your greatest asset against Xeroderma pigmentosum is protecting your child from the sun in any way possible. Gene therapy is the other great horizon, albeit one that it is still rather far away. Until then, scientists will be working day and night on their mission to find a new treatment and to help people like Josh enjoy the small things in life once again - a walk on the mountains, the soft breeze of summer air, or simply laying in the sun.