Sheonad Macfarlane, mum of a girl with SMA: “Over time, you become an expert on your child’s condition” 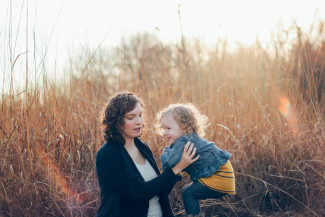 Sheonad Macfarlane lives in Glasgow. Her daughter, Eilidh, is a 10 year-old girl living with Spinal Muscular Atrophy (SMA) type 2. We recently spoke with her about Eilidh’s diagnosis, how she manages her disease and the importance of collaborative work

“Eilidh was a perfect little baby. She reached her milestones on time until she started - then promptly stopped – crawling. Eilidh wasn’t moving like other 10-month-old babies: she now hated being on her tummy and was unstable as she sat playing with toys”.

Sheonad remembers the hard journey to Eilidh’s diagnosis. They went to see a neurologist who at first thought that her weakness probably was because she was frank breech. “He referred us to neurophysiotherapy. Three months later, I began to notice that Eilidh's upper body tone and strength were now poor – she was so floppy”. However, during another appointment, the consultant rejected the breech hypothesis. “She may have a neuropathy or a myopathy but she doesn’t look like a normal myopathy. I’ve been thinking about spinal muscular atrophy (SMA)”.

A week later, on May 27th 2010, the consultant apologised for the delay - the lab had promised that the results would be available by the end of the day and asked us to come to the hospital for the results.

Eilidh has a profound physical disability with poor muscle function affecting all muscles, including those involved in breathing, eating and swallowing. She is a full-time powered wheelchair user and is dependent on others for her care. She has a severe spinal curvature (scoliosis) as a result of her poor musculature and this causes her to be uncomfortable and in pain at times. Bilateral dislocated hips also cause discomfort. Eilidh tires easily too.

Eilidh’s day is always full of laughter and cheekiness but the physicality of the day for Sheonad as her mum is difficult as she is dependent on others for all activities and care. “She wakes up about 7 am. Her spinal brace is put on with much resistance from her as it limits her movement and as a result her quality of life. It’s then breakfast and the bus to school. She attends a local mainstream school where she has a 1 to 1 pupil support assistant”. Eilidh was recently diagnosed with dyslexia and dyscalculia so she struggles with her writing, spelling and maths but enjoys science, art and looking after younger pupils. “On returning home she will spend some time on homework before our evening meal with all of the family. Overnight she is wakeful and calls out to be turned frequently as she is unable to move herself. Out of school, Eilidh enjoys swimming, baking, singing and Girl Guides – she is sociable and chatty and has a wonderful radiant personality (apart from when she’s grumpy!)”.

Are you affected by spinal muscular atrophy (SMA)?

When we ask Sheonad about how many specialists treat her daughter, she is quite direct: “It might be easier to ask which specialists don’t see Eilidh!”

Her daughter visits the community paediatrician, the neurologist, the cardiologist, the endocrinologist, a dietician, the National Spinal Deformity Service, Wheelchair Services, she goes to Occupational Therapy… Eilidh does not see her family doctor or general practitioner at all. “I manage Eilidh at home to the point where I think that she is unwell and then take her to the hospital team. I have the confidence to do so as I’m also a doctor, but, truth be told, living with a rare disease such as SMA means that you become an expert parent and a parent always knows best – a strange family doctor or GP may not understand just how unwell your child is”.

Eilidh has daily physiotherapy to stretch her muscles, slowing contractures and trying to maintain good postural support, ensuring a good level of comfort through the day and night. “We go to hydrotherapy twice a year – a block of 6 weeks. It would be great to be able to have more sessions but demand on the facilities is high”.

Regarding the medicaI care received by Eilidh, Sheonad finds it comprehensive and wonderful. “You sometimes have to advocate more and push for improved services but we have been lucky to date. I fear that this will change as Eilidh transitions from paediatrics to adult services, as adult services are not co-ordinated or comprehensive”.

Sheonad is in contact with other families in the same situation. "We are so very lucky in that we were introduced to a family who live just 5 minutes from us. This happened within six months of Eilidh’s diagnosis. They are a family of four with two daughters – with a similar age gap to ours – and their youngest also has SMA. They have been a life line and we now consider ourselves as family. Their daughter is 8 years older than Eilidh so they have lived through much of what lies ahead for us as a family – that guidance and support is immeasurable”.

A Sheonad states, the SMA community is small in Scotland. “Over time we have been able to meet at events run by MDUK and SMAUK. As a result of shared experience, a community of support has been established; if I have a question or if Eilidh has a question, then I have somewhere safe to go to ask it. I respect and trust the support they offer”. She also uses social media as a means of contacting patients from other places.

“I know that we are not alone in living with SMA and all that it brings to life”.

Research and collaboration with professionals

When asked about the need to investigate further on rare diseases like her child's, Sheonad insists that it is absolutely necessary. “I pushed for a neurology consult, going to a friend rather than waiting to be seen – we could have waited months for a diagnosis. We are also lucky that we live in a city which has a large tertiary children’s hospital with lots of specialists. They had seen SMA before; they knew what they were looking for”.

Recently a gene therapy treatment was approved by FDA. “Now that this treatment will change the course of SMA, new-born testing needs to be considered”, says Sheonad. “The genetics of SMA are complex, however. There is also a place for pre-natal screening, as 1 in 40 of us are carriers”.

Sheonad finds it important to work in a collaborative way with professionals.

“You realise over time that the health care professionals cannot know everything about every disease. You read and learn more about your child’s condition, you become an expert, you teach them, they read and research, and then you talk through your findings. This collaborative working is necessary for ensuring excellent person-centred care. As a mum you will do anything to help your child and speaking up is important”.

For Sheonad, all kids affected by rare diseases have some things in common. “Although our children have different rare diseases, they are all just children with similar hobbies and likes/dislikes, with families who love them, living lives unfamiliar with uncertain futures. Our children, although with different genes and conditions, share common symptoms and treatments; we can share our wealth of experience with others”. And this is where Share4Rare comes into play. “A global community will be the result of collaborative working and together the voices of our children and ourselves – as parents, carers, siblings, grandparents - will be heard, regardless of the barriers that exist”.