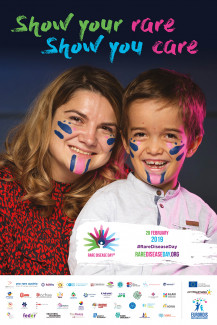 Today is the most special day of the year!

Rare Disease Day is an international event whose objective is to raise awareness, improve treatment access and provide visibility for individuals suffering from a rare disease. Originally established in 2008 by the European Organisation for Rare diseases (EURORDIS), it is held on the last day of February, either the 28th or the 29th depending on the year. The date was intentionally chosen to be on this unique day because the 29th of February is what’s known as a leap day – the “rarest” of the year –, an exceptional occurrence which only happens once every 4 years, during a leap year.

Each year, more and more countries are joining the cause. In 2018, over 90 countries and regions participated, a big improvement over the initial 18 that participated on the first Rare Disease Day in 2008. This shows that great strides have been made over the last few years, giving rare disease patients a strong voice and making them heard.

Why do rare diseases happen?

As the name implies, a “rare disease” refers to any illness affecting a small percentage of the population. There isn’t a single cut-off number by which a disease is considered “rare”, and each country has its own definition - in Europe it’s around 1 in 2,000 people and in the United States it’s approximately 1 in 1,500 people.

Most rare diseases appear randomly. Through a fateful “genetic roll of the dice”, a mutation may occur which may alter a fundamental piece of DNA necessary for the production of a key enzyme, protein or any other molecule. Thus, most rare diseases are genetic and present throughout the person’s entire life. Many of them make their presence early known and are responsible for around 30% of children’s deaths before their 5th birthday, highlighting the importance and seriousness of the subject.

Although most are not inherited, some of them can be passed on to descendants. There is an interesting phenomenon found in some specific communities known as the founder effect, which happens when a very small number of individuals establish a new, wider population. If one of these individuals carries an uncommon mutation, many of the descendants may also inherit the defective gene, causing a usually “rare” disease to be staggeringly common in this subset of population. A classic example would be the Amish community, which exhibit diseases such as Ellis-van Creveld syndrome (involving polydactyly – extra fingers and toes – among other anomalies) much more frequently than the rest of the world. It makes sense after all – the Amish have grown from a very few founders, have not recruited newcomers, and tend to marry within the community.

The founder effect is also seen in some remote islands (such as in Tristan da Cunha, a group of small islands in the Atlantic Ocean) which had their original settlements founded by a few colonists and whose inhabitants all come from the same original ancestors. One of the early colonists carried a rare mutation responsible for retinitis pigmentosa – a progressive form of blindness. Consequently, the prevalence of retinitis pigmentosa in that island has been measured to be around 1 in 58, compared to a worldwide prevalence of 1 in 4,000.

Although there isn’t currently a cure for most rare diseases, the appropriate treatment and medical care can dramatically increase the patients’ lifespan and their quality of life. Even then, great progress is already being made.

Gene therapy posits itself as a promising solution for the near future. The concept is simple: modify the patient’s defective DNA with the correct sequence so that he or she can start producing the appropriate molecule. Unfortunately, there are still many unsolved issues associated with gene therapy. Some of them include:

-Therapeutic DNA only remains viable for a short period of time when introduced into patients’ cells.

-Adverse immune responses against the treatment.

-The possibility of something known as insertional mutagenesis, in which the DNA is integrated by error in a critical region of the genome – such as in a tumor suppressor gene – which disrupts it and causes a tumor.

Newer techniques such as CRISPR (molecular “scissors” able to edit the genome of any cell) are allowing researchers to make much more precise genome changes at exact locations, so all these problems may soon be a thing of the past.

An event like Rare Disease Day is of great importance to our society because, currently, this field still suffers from a lack of medical knowledge and public health policies. However, thanks to all the efforts being made in the last few years, we are getting closer and closer to having real treatment options for rare disease patients, giving them hope and a better quality of life. This is why we must not give up in our mission - impressive progress has already been made and we must continue and step up our efforts in research and awareness.

If you want to partake in this global human endeavor, take a look at the wide range of events being made for Rare Disease Day at rarediseaseday.org or consider sharing this article with your acquaintances. And if you know anyone with a rare disease, Share4Rare is a great platform that may help them connect and get involved in this area of research. Data on rare diseases is still scarce, so joining Share4Rare is a fantastic way of sharing experiences, evidence and knowledge. Every little bit of help is crucial for the future that we all want – a future without rare diseases.