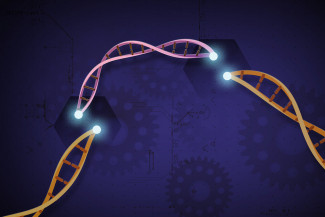 Scientists from the University of Texas Southwestern Medical Center and from the Royal Veterinary College of London have made a significant step forward in the research of Duchenne muscular dystrophy (DMD) managing to restore altered protein levels of dystrophin – through gene editing – in a canine model of DMD.

DMD is a disorder that mainly affects boys and is characterized by progressive muscular degeneration and atrophy. It is caused by mutations in the gene encoding dystrophin, a protein that maintains muscle integrity and function. Dystrophin is normally present in the cardiac and skeletal muscles. In healthy subjects, dystrophin helps maintain integrity of the muscle membranes despite continuous contraction and relaxation of these muscles.

What did the scientists do?

The researchers used a DMD dog model – an animal model which closely resembles the human version of Duchenne’s – which harbored a mutation resembling the one seen in a human DMD gene. They used adeno-associated viruses to deliver CRISPR gene editing components to four DMD-affected dogs, via intramuscular or systemic delivery. CRISPR is an acronym for Clustered Regularly Interspaced Short Palindromic Repeats, a novel technique which allows for precise gene editing with something akin to “molecular scissors”.

What did they accomplish?

After systemic delivery in skeletal muscle, the dystrophin protein was restored to varying levels – between 3 and 90% – depending on the muscle type. In cardiac muscle – in a dog that had received the highest dose – dystrophin levels reached up to 92% of the normal value. The dogs also showed improved muscle histology.

What does this mean for DMD patients?

Despite its encouraging results the study is preliminary and hasseveral limitations, including the relatively small number of animals analyzed and its short duration. The possibility of off-target effects in in-vivo editing -when an unintended site of the gene is edited- is another potential safety concern. Also, the “permanence” of this technique could make it difficult to terminate if safety concerns arise.

Even so, its implications moving forward cannot be understated. It has been estimated that even 15% of normal levels of dystrophin would provide significant therapeutic benefits for DMD patients, and these results -although they were obtained in an animal model- have demonstrated the efficacy of genome editing by reaching up to 80% of normal levels of dystrophin in some muscles after 8 weeks.

All things considered, the results of this research are a great step forward and offer hope for a DMD cure in the future. You can contribute to the global effort of giving visibility to DMD patients by sharing this story with your friends and colleagues, and by taking advantage of the Share4Rare platform – a great tool to connect with other people like you and a safe space to share experiences with other parents who have a child affected by Duchenne’s muscular dystrophy.