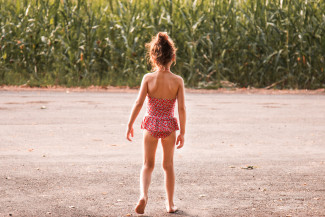 See the study
Irina’s daughter was diagnosed with in situ melanoma at the age of 9. This means there are cancer cells in the top layer of skin and have not grown yet into deeper layers of the skin. That was 3 years ago and Irina was so kind to look back on that experience for us.

Irina, thank you for telling us about your daughter’s story.

If I am to talk about what happened to us, I could tell you that we have taken our daughter to a private clinic rather by chance, not because her paediatrician ever recommended this. When we got there, the dermatologist suggested checking the mole with dermoscopy, just to be sure that it was ok. He did not mention the importance of having your moles checked and he did not say anything about the ABCDE rules. My gut instinct sent me to the doctor because my grandmother had died of cancer 16 years ago. I found out that it was melanoma after we received my daughter’s diagnostic.

How did it all start?

I observed this mole growing in my daughter’s palm and how it evolved in about 2-3 years. My first suggestion to the doctor who did the dermatoscopy was to remove it. She said that it was not necessary, that it was not dangerous but that we needed to observe it over time. 2 years later, the dermatologist then suggested having this mole removed because it had grown and changed in colour. It was also on the palm of the hand, so in a place subjected to trauma. We agreed, and to our surprise, the result from the pathology came back as melanoma in situ.

Are you affected by paediatric melanoma?

We were the ones who collected the results from the histopathologist. We read them at home, by ourselves, and then we googled what melanoma was. The second day after the results came back, a second surgery followed and meant new waiting for us. And it also meant more searching on the Internet for what it meant to have melanoma. As a parent, a mother who searched only “Melanoma” on the web, I panicked, and I did not trust the words of the first doctor. I wanted to have other opinions — and all came back different. I wanted to have different specialists to have a look at this result; I wanted somebody to stop me from going crazy.

What has changed since?

Unfortunately, it took what felt a long time until I got the information I needed. Luckily, I found a patient group called Melanoma Romania and talked with volunteers who provided answers to my questions and calmed my anxiety. They were the ones who explained to me what “in situ melanoma” actually means. After participating in the conferences organized by Melanoma Romania and Melanoma Patient Network Europe I have accumulated more knowledge about melanoma and this gave me the feeling of some control. Getting the second opinion was also important, I only had the guts to ask for it two years later, and the result turned out to be different. Meanwhile, for us as a family, a lot has changed. We are more aware of the time that our children spend in the sun. Playing outside between 11.00-17.00 is a strange habit now but before it was something normal. The UV index that the weather app is showing is something I take into consideration nowadays and monthly body check-ups have become something normal.

Irina, thank you for talking to us and all the best for your daughter!