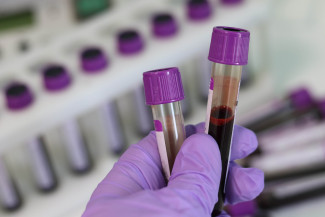 A research group from the Universitat Autònoma de Barcelona (UAB) and researchers from the Sant Joan de Déu Research Institute have developed a new device to monitor the level of ammonium in the patients' blood at the point-of-care. The device is still in the experimental phase, but it may eventually become a cheap alternative to the current monitoring systems.

The Sensors and Biosensors Group (GSB) of the UAB Department of Chemistry, with the collaboration of researchers Rafael Artuch and Xavier Rosell of the Sant Joan de Déu Research Institute, have developed a Point-of-Care analyser to monitor ammonia blood levels. This device will allow to carry out decentralised measurements where the patient actually is, outside the analysis laboratories of the hospitals where the equipment used for this type of analysis is located. The advantage of this analyser is that it can be used in primary health centres, instead of sending blood samples to hospital laboratories, where the traditional measuring equipment is used. This will multiply patient monitoring sites, facilitate the process and reduce the time needed to take medical decisions,

Why is it important to measure ammonium blood levels?

Ammonium is a gaseous molecule that can be used as a biomarker to diagnose some rare inherited metabolic diseases, such as urea cycle disorders (carbamoylphosphate synthase deficiency, ornithine transcarbamylase deficiency, etc.), organic acidemias, and other metabolic conditions and environmental factors affecting the liver. In these pathologies, there is an increase of ammonium levels in the blood that put the patient's life at risk. For this reason, early and real-time ammonium concentration measurements are essential. Currently, these patients must go to the hospital on a regular basis to have their blood ammonia concentration analysed in situ. Thanks to this new device, patients will save time, as they will not have to go so often to the hospital. As Mar Puyol (UAB), leader of the study, states, "Increasing the frequency of blood tests in these cases is of vital importance. The patient will have a more favorable evolution the sooner we intervene, and this is achieved with on -site analysers like the one we have developed”.

The device is currently being tested and a prototype is being fine-tuned so that it works in semi-autonomy conditions. Once operational, scientists will measure ammonium every day in all the samples that are analyzed at the Sant Joan de Déu Barcelona Children's Hospital, both using the conventional method and the new device. Hundreds of samples will be needed to validate the device, which will subsequently be industrialised and launched in the market. There is still a long way to go to reach this point, but the research group expects it to become an economic device that will facilitate the monitoring of liver diseases in developing countries as well.

Are you affected by a metabolic rare disease?