How are genetic diseases inherited I: autosomal dominant inheritance 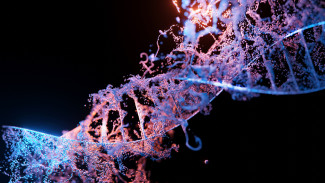 A hereditary disease can be passed on to the offspring through several pathways. Sometimes the "defective" gene comes from the father, sometimes from the mother, and on certain occasions both parents must carry the mutation for their children to develop the disease. In this blog we will talk about a type of transmission of genetic material called autosomal dominant inheritance.

Some diseases are inherited in a family in a dominant way. This means that a child may inherit a normal copy of a gene and a mutated copy, and yet the latter will dominate or invalidate the working copy. This will lead the son or daughter to develop a genetic disease. The specific genetic disease developed by this person will depend on the instructions that the mutated gene has given to the body. Let us take, for example, the case of osteogenesis imperfecta, a disease linked to genes that participate in the process of encoding the collagen protein, essential for the structure of the bones. In this case, the disease will manifest itself if there are mutations in only one of the copies of the gene involved, which, in the case of osteogenesis imperfecta, is caused by defects in the COL1A1 and COL1A2 genes in 90% of the cases.

Some dominant genetic diseases affect a person from birth and others only affect when the person has reached adulthood. The latter are known as late-onset diseases. More examples of dominant genetic diseases are adult dominant polycystic kidney disease, Huntington's disease, Caroli's disease, retinoblastoma, von Hippel-Lindau syndrome, dentato-rubro-pallidoluysian atrophy or Steiner myotonic dystrophy, among others.

When a parent has a mutated gene, they can pass on their mutated or normal gene to their offspring. Each of their children will have a 50% chance (1 in 2 chances) of inheriting the mutated gene and being affected by the genetic disease, and another 50% (1 in 2 chances) of inheriting the normal copy of the gene; if this happens, the child will not be affected by the disease and will not transmit it to their offspring. This happens randomly. The probability remains the same in each pregnancy and between boys and girls.

What happens when a child is the first person in the family to have the disease?

Sometimes a newborn with a dominant genetic disease is the first affected person in the family. This can occur when the mutation has occurred during the period of formation of the egg or sperm. When this happens, the parents of the child are not affected and it is unlikely that they will have another son or daughter with the same disease, although in these cases it is always recommended to discuss the potential risks with a doctor and to ask for genetic counseling. However, the affected child has the mutated gene and can pass it on to her offspring.

Tests during the pregnancy

For some dominant genetic diseases, it is possible to perform a test during the pregnancy to determine if the baby has inherited the disease. It is very important that you ask your doctor and/or genetics specialist about the type of genetic tests that you can undergo during pregnancy.

If someone in your family has a dominant inherited disease, they may want to tell other family members. This can help to get their diagnosis or whether they plan to have children.However, some people find it difficult to discuss genetic diseases or abnormalities with family members. In some cases, for fear of causing an anxiety situation and, in others, for not having contact with their relatives. This can be solved by going to genetic specialists, who have enough experience in these environments to offer help and discuss the situation with other family members.

Things to bear in mind

Affected by a rare disease?