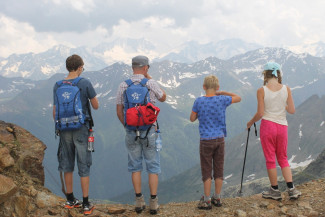 Some days ago we heard about Lucas, a patient from Alaska who has giant congenital melanocytic nevus. He is only 12 years old but this disease has conditioned his health and social life since he can remember.

Lucas was born with some birthmarks on his skin. These giant marks appear due to a defect in the melanocytes during the embryonic development. These cells are responsible for producing melanin, the molecule that gives skin its colour. During the development of Lucas as an embryo, some of these melanocytes duplicated more than they should, covering a wider skin surface and producing more melanin. These birthmarks probably cannot harm a person’s health, further than the psychosocial impact that this condition can generate. But, sometimes, consequences may come into the picture: cutaneous melanoma or neurocutaneous melanosis development.

Melanoma is one of the most dangerous conditions that giant nevus can produce in a patient. Children born with giant congenital melanocytic nevus (GCMN) may develop melanoma at some point in their lives. Melanoma is a type of skin cancer characterized by the uncontrolled duplication of melanocytes invading the tissue under and around the skin, going sometimes to deeper layers of the skin to the blood and lymphatic vessels. In this last case, cancerous melanocytes can travel around the body and lead to more severe complications such as invasive tumour and metastasis.

Are you affected by giant congenital melanocytic nevus?

This is a strong reason to perform thorough controls to patients with GCMN along their lives in order to check the development and behaviour of their pigmented skin. Usually, the clinical team attending a patient with GCMN is formed by a general practitioner, a dermatologist and a team of psychosocial support often formed by a psychologist and/or social resources.

Neurologists play a fundamental role in the second important consequence of this genetic condition: neurocutaneous melanosis. This disease consists of the presence of melanocytes in the central nervous system (brain or spinal cord), what may promote in some cases a higher pressure of the nerves generating symptoms such as dizziness, headaches, loss of muscle control, balance, etc. In the case of brain affection, it can produce high intracranial pressure, loss of the speech or vision and other relevant consequences. This is why the clinical team should constantly follow and evaluate the patient, to study if some of the birthmarks can carry an important aggressive risk. In this case and if possible, the affected lesion should be removed using surgery.

Cutaneous melanoma and neurocutaneous melanosis are often more associated with giant birthmarks and mainly during childhood. The size of the nevus and the localization often limit the surgery possibilities. This will be performed only to remove a suspicious mark and the tissue will always be examined after extraction. Considering the low prevalence of this disease, it is essential to invest in research to promote a better knowledge of this condition regarding its causes and evolution.

Even if having GCMN means a higher risk of developing some of the mentioned diseases, this does not mean they will always occur. In fact, with the correct clinical follow-up, these people can live in a normal way. Yet, the most challenging issue is still learning to live with the psychosocial part of the disease.

Do you have giant congenital melanocytic nevus? Do you want to join our community and get to know more people like Lucas? We are waiting for you!