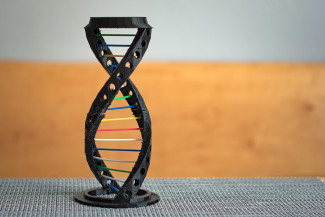 In this blogpost, we will explain basic genetics in order to understand what chromosomal mutations are, as they are the origin of many rare diseases.

First things first: What are genes and chromosomes?

Our body is made up of millions of cells and most of these cells contain a complete set of genes. Genes are like a set of instructions that control body growth and functioning. In addition, they are responsible for many of our visual (and not so visual) characteristics, such as eye colour, blood type or height.

Genes are contained in string-like structures called chromosomes. Normally, there are 46 chromosomes in most of our cells. We inherit our chromosomes from our parents, 23 from our mother and 23 from our father, so we have two sets of 23 chromosomes, this is, 23 pairs. The fact that our chromosomes are made up of genes means that we usually inherit two copies of most of them, one copy from each parent. Chromosomes and genes are, in turn, made up of a very peculiar biomolecule called DNA.

We need to have a correct balance of chromosomal material, since changes in the number, size, or structure of our chromosomes lead to changes in the amount or location of genetic information. This can cause the child learning disabilities, developmental delays and other health problems.

Chromosomal anomalies can be inherited from the parents and commonly occur during the formation of the egg or sperm or during conception, and there is nothing we can do to prevent them.

There are two main types of chromosomal anomalies:

Normally, each human cell contains 46 chromosomes. Sometimes, however, a baby may be born with more or fewer chromosomes and as a consequence the number of genes or instructions will also vary.

One of the most common examples of a genetic condition caused by an extra copy of a chromosome is Down syndrome. People with this condition have 47 chromosomes in their cells instead of 46. This is because there are three copies of chromosome 21 (trisomy 21), instead of two copies.

We say there is a monosomy when a there is an absence of a copy of a chromosome pair. For example, girls with Turner syndrome have only one copy of the X chromosome and present short stature and delayed puberty.

Structural chromosomal anomalies will be addressed in another blogpost. Stay tuned!

Are you affected by a chromosomal anomaly?