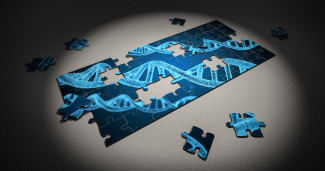 To date, 92% of life’s instruction manual had been deciphered, but we still needed to shed some light on the dark areas.

The international research consortium Telomere-to-Telomere (T2T) has recently published a complete sequence of a human genome in Science Magazine. It is the first time in history that a completely sequenced human genome is available, detailing the order and assembly zones of its 3.055 billion nucleotides, the basic building blocks that make up nucleic acids, which, in turn, form DNA. The first draft of the human genome, called GRCh38, was published in 2001, covering 92% of the sequences, and over the years, new blocks have been added. However, this is the first time that 100% of the sequence is available, which they have named T2T-CHM13. This genome has been obtained from a tumour derived from a human embryo of a person with European ancestors.

As Spanish journalist Manuel Ansede explains, scientists compare the 8% of the missing sequences to the pieces of a puzzle that have a blue sky on the box, pieces that are very repetitive and difficult to put in. Recent technological advances have made it possible to identify these pieces and set them in the correct place of the genome.

What parts of the human genome were missing until now?

This new reference genome includes new assembly zones between sequences that were previously unknown, and almost 2,000 new gene predictions that need to be analysed in order to find out whether they have instructions to make proteins (the so-called "coding DNA"), or they have other functions: regulation of genetic activity, spatial conformation, production of RNA molecules responsible for protein assembly, protection, etc.). The new reference genome also corrects thousands of errors found in the previous one.

Why is this such an important milestone for medicine?

This news has had a lot of repercussion, not only because it is a milestone in basic science, but also because the finding of the existence of these new DNA sequences opens the door to develop new therapies. For rare disease diagnosis, geneticists compare fragments of the genome of their patients with the reference genome, and now they will be able to do so with much more precision and success. Cancer, age-related pathologies, rare genetic syndromes... These diseases are written in our genes and from now on, it will be easier and faster to detect them and know more about their prognosis.

In the near future, it will be necessary to describe complete genomes of people belonging to diverse racial profiles, since there are genetic diseases that are more common in certain human population groups.