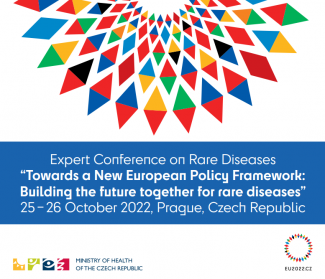 The Expert Conference on Rare Diseases “Towards a New European Policy Framework: Building the future together for rare diseases” took place in Prague between 25- 26 October 2022.

Several European politicians and technicians attended this conference where the Czech government committed to push on a European action plan on rare diseases, presenting a Call to Action also endorsed by France.

The Call to Action aims at offering a road map for all European countries to work together and end access inequalities between countries.

Some of the recommendations included in the document were:

EURORDIS has welcome this initiative. According to Yann Le Cam, EURORDIS Chief Executive Officer, the Call to Action “reinforces the urgency and will of Member States to strengthen collaboration on rare diseases at the European level. It is a major step forward, with Czechia establishing a clear stand on how a European Action Plan on Rare Diseases will lead our health union".

Now the rare disease community is asking for the commitment of all Member States to endorse the Czech call to action. Will this be possible? What would you have asked the politicians who attended the conference?